During the 2020 Presidential election a record number people voted by mail or absentee ballot.  The majority of these people voted for now President Joe Biden while most Trump supporters voted in person.  In fact, 159,633,396 total votes were cast with Biden getting 81,283,098 votes, or 51.3 percent while Trump won 74,222,958 votes, or 46.7 percent of the votes cast.  More people voted in this election than for any other in history.  Now, you would think that this was a good thing, correct?  Sure, voter turnout is usually dismal at best especially during off Presidential elections.  Again, this was a really good thing, right? 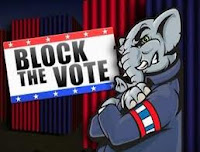 Well, it is not a good thing according to Republican State Lawmakers.  In 43 states across the country, Republican lawmakers have proposed at least 250 laws that would limit mail, early in-person and Election Day voting.  These limitations include such constraints as stricter ID requirements, limited hours and a narrower eligibility to vote by absentee ballot.  This is according to data compiled as of Feb. 19 by the nonpartisan Brennan Center for Justice. Even more proposals have been introduced since then.  In essence, the GOP did not like the election results so now they want to change the rules.  Many of these Republicans who are leading this charge are Trump loyalists who have fed into the "Big Lie" that the election was stolen and that Trump won in a landslide.  Of course, any human being with 5 brain cells in their skull knows that this is not true.

Just to outline a few of these potential changes that all Americans should be worried about;

1.  In Iowa where Republicans have the majority in the State Legislature, in a vote strictly along party lines, they voted a few weeks ago to cut early voting by nine days, close polls an hour earlier and tighten rules on absentee voting, as well as strip the authority of county auditors to decide how election rules can best serve voters.  Basically they are tailoring the voting rules for older white Republican voters.

2.  In Georgia, the GOP is proposing sweeping voter rules regulations which include cutting the times  for early voting down to three weeks.  People would also only be able to vote early Monday through Friday from 9AM to 5PM, the times that most people actually work.  Also, they also proposed to shrink the window for Georgia voters to request an absentee ballot and limit the timeline for county officials to mail them out. No absentee ballot can be requested earlier than 11 weeks before an election or later than two Fridays before the election.  These absentee ballots would not be sent out by mail until four weeks before day of the election.  At this point, the voter could only hope that the USPS can deliver it on time.  In addition to these changes, the Georgia GOP wants to cut out many if not all of the voting drop boxes and place insane time limits on the mobile voting buses which were mostly used in Fulton County which includes Atlanta.  Another move to suppress the minority vote which are mostly Democrats.

3.  In Arizona, the State Legislature has proposed many of the same changes which are being made in other states, however, Rep. Shawnna Bolick, R-Phoenix, has proposed letting the Legislature void the results of a presidential election if it chooses.  This insane Bill would allow the House, by a majority vote, to revoke the Secretary of State’s certification of presidential electors chosen by Arizona voters to cast the state’s electoral college votes.  To put this in context, Arizona residents go to cast votes and if the State Legislature does not like the result, they can void the results.  Along with this voter suppression, they added another bill which would let the Legislature award two of the state’s 11 electoral college votes.  So the people of Arizona get to cast votes for 9 Electoral College votes while the party in power gets 2 free-bees to cast whatever way they want.  This actually makes me sick!

The Bottom Line here is the Republicans did not like the historic voter turnout in the 2020 general election nor the result. They have seized the opportunity to manipulate their majority to change the rules based on racist allegations of voter fraud and election irregularities.  Of course there has been no factual evidence to support this baseless claim.  These unscrupulous legislators have introduced well over four times the number of bills to restrict voting access as compared to this time last year. Thirty-three states have introduced, pre-filed, or carried over 165 restrictive bills this year as compared to 35 such bills in fifteen states on February 3, 2020.  In essence, the Republican party wants to stop certain people from voting because when there is a high voter turnout, Democrats win.  They want to suppress the votes of minorities and working class folks like you and I.  Is this just the start of total voter suppression?  Will the time come when only certain people can vote?  Will the time come when there are no elections, Period?  As Americans, we have the right to vote with no impossible limitations in place to stop us.  This angers me and it makes me afraid of what may come down the road.  You should be very afraid of these changes because your right to vote is next.

A lot has been going on over the past week or so, some good, some bad and some that just tick me off.  After careful consideration, I was not able to pick just one topic to write about this week.  As you may know, when I have more than one topic I want to Gripe about, I belly up to the bar and I have the bartender line up the shot glassed to pour me a few Gripe Shots. To start off with my first Gripe Shot, I have to say that I am sick and tired of Covid-19.  I'm tired of being cooped up in the house, tired of the masks and tired of tip toeing around.  However, one of the things I miss the most is going out to the local tavern to sit with a few friends to drink a few beers and have some laughs.  I know the time for this will be coming soon but I'm hanging on by a thread.  Yes, I wear a mask when I go out, I keep my social distance and I got my first vaccine shot.  It's been almost one year since we locked down due to the Big-19 and I for one am sick of it.  I do feel that

I am totally confused!  I know, it doesn't take much, but the events of this past week regarding the 2nd Trump Impeachment vote has me scratching my head.  Whether you believe Trump was guilty or not, you have to question the thought process behind some Senator's voting to acquit.  If you are not familiar with the Impeachment process, please read last weeks post and it will give you all that you need to know in a few paragraphs.  What I am baffled by is the reasoning, other than partisan politics as usual, behind why almost every Republican except 7 voted Not Guilty.  I am also befuddled to their rhetoric afterwords regarding the former President. One of the main sticking points Republicans had of this Impeachment process was that a President who is no longer in office cannot be Impeached.  The Constitution is not 100% clear on this point, however many constitutional scholars believe that you can Impeach a former President for transgressions he or she committed while in office.